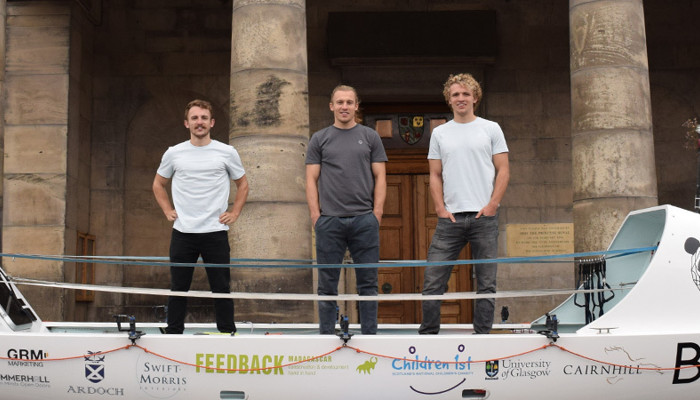 Where did this idea really start?

Our dad showed me an ad for the Talisker Whisky Atlantic Challenge and I thought it was an awesome idea. I’ve done some cycle touring and showed it to my brothers who were dead keen.

We chatted about it for about a month and then Ewan caught wind of it. ‘There’s not a chance that you’re doing this and I’m not.’

What was the process of getting this off the ground?

We had to think of a name, then create a brand, put together a sponsorship proposal and then speak to as many people as we could.

The race organisers have loads of information on exposure benefit like getting the sponsor logo on the boat and getting involved. With that we went to companies that we have a connection with to get a foot in the door and proceeded from there.

The first couple were the hardest because before anyone has backed you, you are just three blokes saying that are going to row across the Atlantic. Once you have a few that believe in you then it begins to build momentum.

People will look at the boat and recognise that it is not that big.

No, it’s not but we’ve been assured by the boat builders that it is unsinkable. It’s compartmentalised so you could chop it in half and it will still float. It meets all of the requirements of a lifeboat – it is self-righting and pretty robust. The more you learn about it the more you realise that the boat is incredibly well made. There are so many safety precautions we have to meet because of the demands of the race rules, so many courses that we’ve been on that, although it seems small and daunting at first, the more you learn about it the more achievable it becomes.

What are your days going to look like? Simple things like eating, resting and going to the toilet…

The days and nights merge into one, it’s a continuous process. We’ll do two hours on one hour off and maybe change that up if we’re particularly exhausted. It’s so weather-dependent. If it’s flat and calm that’s when it’s more strenuous physically, it’s like pulling through concrete, but it’s deceptively fast and the hope is that we have a decent amount of wind and a wee bit of swell with us.

We’ll get up and someone will make all of the food for the day, they’ll include snack packs and be labelled so we make sure we get our three or four meals.

Toilet-wise we have a bucket so we’ll know each other pretty well by the end of it. But we’re eating freeze-dried food so we won’t use the toilet as much. The one we’ve gone with, Lyo Food, they’re really good and organic and they make food that really tastes good.

In terms of boredom, what are the milestones that you’re looking out for?

You celebrate every tenth, so every 300 miles, and half way is obviously quite a big thing. But that’s kind of weird because there’s no line so you’re half way for about five days.

Like the rest of the project you just have to break it down like, ‘I’m going to do this two hours on the oars and get this shift done.’

What kind of support team do you have around you or is it just you guys in the water?

The race organisers have two boats that sail up and down the fleet, however, with such a variety of racers from soloists to 5-man boats, it is likely that there will be 100 of miles between the different boats. Meaning it is near impossible for the organisers to be able to come to a boats aid if required.

The reality is that we will be closer to a tanker than the organisers.

However, we have heard some horror stories of people trying to be rescued by tankers, it is one of the most dangerous things you can do and should be avoided. 9 times out of 10 you don’t need to be rescued; we will have the resources to be able to resolve most situations. The only reason we would need help is if there was an extreme medical emergency. Even if it was to capsize it will self-right itself.

How do you get drinking water?

We have a water maker, which is a little machine connected to the bottom of the boat. This pulls in salt water and desalinates the water, however, doesn’t taste the best.

As it’s a small boat and a small space for 3 people. Who do you think will wind you up the most?

We have both decided it will probably be Ewan, he would be the first to go. Truthfully, we all get on pretty well and if we were to fall out it probably would have happened by now.

Is there one person in charge or is it very much shared ownership?

Shared ownership. We are meant to have a skipper just for the formalities of leaving and arriving in the port. At the moment we haven’t decided who is going to take that position. No doubt it will be the oldest brother.

What is the estimated time it will take you to complete the race?

A trio is actually quite a rare number of people to take part in this race. This is due to the shift patterns and the design of the boat. Most boats are made for 4 or 5 people and if you were a pair you would have a slightly smaller boat. The boat we have is designed to be a 4-man boat.

I think there have only ever been 5 trios that have taken on the Atlantic. The record time for a trio at the moment is 41days 17hours. However, two years ago when it was extremely fast conditions there weren’t any trios in that race, but the quad did it in 29days and the soloist did it in 30days.

30 days is crazy. This is the guy who was seeing zombies coming out the water and didn’t sleep for any longer than 20minutes for the full crossing.

Have you been trying to train yourself into shorter sleeping?

We tried it, we did a continuous row over to Stornoway and back, which was at night and we had shift patterns, it’s not that enjoyable. They say that the first week is the hardest and then you become adapted to living on the boat and the shift patterns.

We have been advised to once a week get up in the middle of the night and do a workout and then not go back to bed so you are tired all day so you can get used to the lack of sleep. It will be horrendous but think your body will adapt.

Do you think there will be any way to be fully prepared?

You can’t really prepare for the conditions and sleep deprivation.

Unless you pulled yourself out to mid ocean or far offshore to try to experience the conditions and then try to go for a week.  That might be the best but you become exhausted and we want to have a full tank for when we set off.

How does the boat get to the Canary Islands?

The boat goes on another boat and gets shipped out to the Canary’s and will also get shipped back from Antigua as well. It would be nice to row it there but think it might be a bit too much.

What are you expecting in terms of weight loss?

Some people put on lots of fat before and they lose up to 20% of their body weight. A guy this year started at 129kg and came back 99kg. But we have not been trying to put on loads of weight, we are all quite naturally lean and struggle to put on fat. We might put on 5kg but nothing too drastic.

I think old school ocean rowing, they would say you have to put on loads of weight and you almost get into a ketogenic state before and then you will just be burning off that fat but I think that is a myth. We will probably get ketogenic anyway and not even meaning to as we will be eating lots of fat and not that many carbs.

How does training work? Are you just getting used to doing 2hours at a time or is there more thought process behind it?

A lot of the training actually began with mobility and flexibility, preparing your joints so you are efficient as possible. Then the gym training is mostly endurance, it has some exercises on the ergs (indoor rower). Rowing on an erg besides from being very, very boring is quite different. Getting out on the boat as much as possible is our main training.

Saying that we are about to do 24-hour row on the erg outside Hollyrood. There will be one machine and the three of us will be taking it in turns. After we finish there will be a gig with Childrens 1st outside the parliament.

Are your parents both engaged in the process?

Yes, they both are. To begin with they were both very worried but as they learn more about it the less scary it becomes. Involving them in the journey is key.

How do you keep up to date with your journey?

You can visit our website where there is a newsletter.

You can also track us live during the race on our website.

Along with other schools, the Edinburgh Academy will be taking part is Beatbroar. The idea is to raise money and cheer on the brothers. Each school will put together a team of pupils to row the race distance within one day.