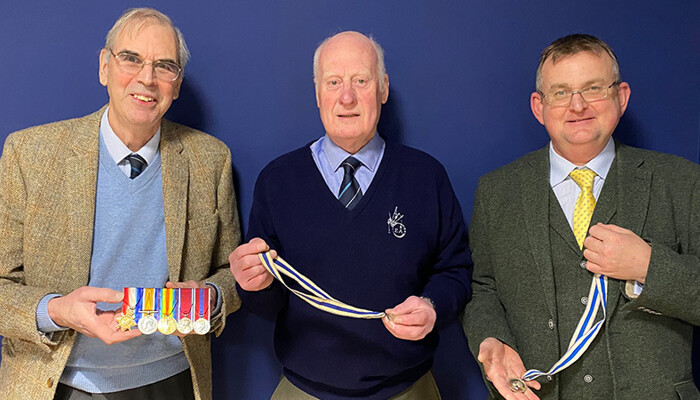 On Wednesday 26th January, President of the EAC, Tony Cook presented a series of School and Great War medals to the Academy’s archives, which previously were awarded to Academical, Charles Kenneth Mackinnon Douglas (EA 1902-12).

Charles Kenneth Mackinnon Douglas was, to many, the greatest synoptic forecaster of the 20th century. He was born in Edinburgh on 29 May 1893, the elder son of Dr K. M. Douglas (EA 1873-79) and his interest in meteorology was kindled as an 11-year-old schoolboy. He was educated at the Edinburgh Academy, where he twice gained awards for being top pupil, and at King’s College, Cambridge, where he read Mathematics. Whilst at the Academy Charles was awarded the Mitchell Medal for Mathematics (named after Robert Mitchell, one of the first Masters at the Academy in 1824) and the Gloag Medal for Best in Mathematics (named after James Gloag who was the first Mathematics Master).

In the Great War, Douglas received his commission in the Royal Scots, but was soon transferred to the Royal Flying Corps. Whilst on flying duties between May and July 1916, Douglas, then a lieutenant, had many favourable opportunities to photograph and study clouds and weather phenomena, and in these operations he showed considerable flair. The changing patterns of the clouds provided him with an insight into the physical processes of the atmosphere, and their value in forecasting work. After the Great War, Douglas became one of the best practical meteorologists in Britain and the senior forecaster during World War 2.

Douglas was instrumental in the timing of the D-Day landings, and became the mastermind behind the D-Day forecasts, and was later awarded an OBE for his service. It was essential for the timing of the landings to be exact, and not to be a failure due to bad weather. Two US meteorologists believed the attack should have taken place on June 5 due to their data predictions, however Douglas and his team forced the landings to be delayed 24 hours – a decision that was critical when rough seas and high winds appeared on the morning of June 5. The forecasters had displayed an international and inter-service approach which led to the success of the forecasts, and which was then considered the most important in the history of the world.