Teaching was always the first choice of career so following a degree and PGCE at Durham University, Tim taught in Liverpool, Bristol and Worksop before arriving at The Academy in September 2019 as Senior Deputy Rector. The pastoral side of school interested him originally: he was a Form Tutor, Year Head, Resident Assistant Housemaster then Housemaster before taking on a variety of portfolios on the leadership team at his previous school, including Deputy Head (Academic) and Senior Deputy. Here, responsibilities include the curriculum, timetabling, the calendar and day-to-day management of the school, supporting and deputising for the Rector and leaning heavily on the talent, energy and commitment of his colleagues.

Beyond the classroom, interests centre around music and drama (often together) as an actor, director or audience member, though with four children (two of whom now attend The Academy), there can be precious little time for those. Getting out and about (he would really like a dog) and good food fill the rest of his life. 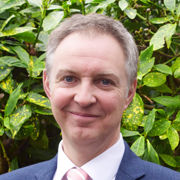