Barry is the 18th Rector of the Edinburgh Academy, having taken on the role in August 2017. Barry has had a varied teaching career. He started out at Harrow School and took on the role of Head of Geography at Fettes College. After 11 years, he was promoted to the role of Deputy Head of Shawnigan Lake School, Canada. He moved back to Edinburgh in January 2017 to take on the role of Senior Deputy Rector and then Rector of EA. His two sons are both at the Academy. Outside of school life, Barry enjoys the great outdoors and loves getting out on the hills. 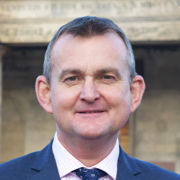